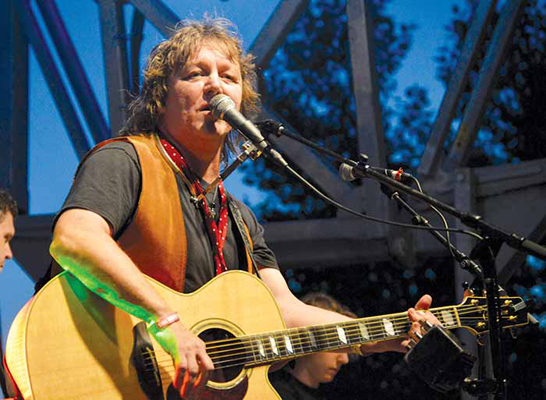 When suggested to Rusty Bladen that few musicians in Madison could match the sheer breadth and legacy of his career, he was taken aback for a moment. But then he said, “You know, with the passing of Don Youngblood, you may be right.” Arguably Darryl Hewitt and some others have been at it just as long, but none with the consistency and determination of Rusty. He hasn’t had a “day job” since 1981, and today he plays over 100 shows a year in the tri-state area.

“The bigger gigs are in Cincy, Indy and Louisville, as you might expect,” he says, “But a lot of my best jobs are in the smaller towns. The crowds are often bigger, the paychecks better, and they just seem more appreciative somehow.”

Asked how he keeps his act fresh, he points to his extensive working song list. He selects from nearly 400 cover tunes, plus about 50 originals to create a unique mix virtually every night. “You’re never gonna hear the same show, no matter how often you see me,” Rusty says. (Check out RustyBladen.com for complete song list … it’s pretty fascinating)

His professional career spans four decades, starting with his time as lead singer for the band Aura, a name that will bring a smile to many of a certain age. In its heyday, Aura would sometimes play six nights a week at the legendary Hereford Lounge. “We were the Kings of Madison” Rusty reminisces.

In 1986, he quit Aura and struck out on his own, playing guitar on stage for the first time and writing original songs. Things really jelled for Rusty with the release of his first solo album, which included the songs “Just for Awhile,” “Don’t Blame It On Me,” and (one of my personal favorites) “Are You Happy Now.” His discography now counts nine albums, with more to come. “I’m about ready to start working on a bunch of new original songs,” Rusty said.

Rusty still does a lot of solo work, but he’s also been experimenting with his version of a White Stripes style, adding simple drums with his guitar. Drummer Tyler Brindel has become a mainstay in Rusty’s band, plus he’ll add sons Neil Bladen on bass and Jackson Bladen on keys, when needed.

Asked about eventual retirement from music, Rusty was adamant. “There’s no plan B. I’m gonna do this ‘til I can’t anymore, just like Mickey Clark did. Until my fingers won’t move or I lose my voice.” Rusty turns 60 in December. And, as his old Aura mentor Rick “Termite” Walters once told him, “Stick with rock and roll son, it’ll keep you young!”

You can catch Rusty with a full band performance scheduled November 25 before the Colts game at Lucas Oil Stadium.

FROM RUSTY BLADEN 10:05 am. July 16, 2018. I’m alone in my office. There’s a soft rain coming down outside the window. We need the rain to cool down the very high temperatures we’ve had for the past two weeks. However it’s a sad rain. My friend and fellow songwriter, Mickey Clark passed away yesterday… END_OF_DOCUMENT_TOKEN_TO_BE_REPLACED

Losing Tom Petty: What it means to me

It was November 1979. My mom was giving me a ride to my job at Burger King in Madison. We were listening to the radio when I first heard Tom Petty’s song, “Don’t Do Me Like That”. It was so catchy. Right away, I was hooked. And I’ve been hooked on his music ever since.… END_OF_DOCUMENT_TOKEN_TO_BE_REPLACED

From Roundabout Madison Home grown rock ’n roller Rusty Bladen will perform Sept. 8 for the final concert of the season for the Madison Main Street Program’s Music in the Park series, making it a true hometown event. The event begins at 5 p.m. with food vendors, with a 6 p.m. opening act by The… END_OF_DOCUMENT_TOKEN_TO_BE_REPLACED

Rusty and the band in a video shot Friday night in Columbus, Indiana by longtime Rusty Bladen friend Brad Shouse.

Fans of Rusty Bladen’s Christmas album will get a special treat tonight at The Garage Pub & Grill in Columbus, Indiana. The album, recorded with John Mellencamp’s band members, Dane Clark on drums and Troye Kinnet on keybords and accordion, has been getting radio airplay since it’s release in 2006. Other musicians contributing are Vernay… END_OF_DOCUMENT_TOKEN_TO_BE_REPLACED

Rusty Bladen, the hometown storyteller and minstrel, will be lighting up the stage at Red Bicycle Hall on Thanksgiving Eve (November 23) just in time for the holiday. Bring the family, meet your friends, come early and stay late. The fun is just beginning! Special $5 show on one of the great party nights of… END_OF_DOCUMENT_TOKEN_TO_BE_REPLACED

NEW MUSIC FROM RUSTY BLADEN: Rusty wrote and recorded his new song “Jamie’s Garden” as a tribute to a young mom who died unexpectedly, leaving two kids – and a garden – to be raised by her mom and dad. The song debuted on the Rusty Bladen Fans and Friends page on Facebook on Tuesday,… END_OF_DOCUMENT_TOKEN_TO_BE_REPLACED

This Saturday night (Sept. 24), Rusty Bladen debuts at the Triple Play BBQ in Franklin, Indiana. A beautiful big room, the venue has a retractable roof, so let’s hope for great weather and homegrown rock and roil under the stars. 9:00pm start. VENUE: 186 W. Jefferson St Franklin, IN 46131 Sunday (Sept. 25), if you… END_OF_DOCUMENT_TOKEN_TO_BE_REPLACED

This Weekend: Shows in Madison and Columbus

FRIDAY SEPTEMBER 9 LIVE AT OFF BROADWAY TAP ROOM 218 E. Main / Madison, Indiana / 9pm Hey Madison fans! A Friday night at the downtown home of great Americana rock and roll, this show is Rusty’s first appearance for a show in Madison this summer! Catch the rocking solo show. It promises to be… END_OF_DOCUMENT_TOKEN_TO_BE_REPLACED