With For The Better (2015), Bladen recorded arguably his best album ever – a Midwesterner’s take on country and rock and roll. The mixture of Bladen’s writing (he penned all the songs) and sound with producer Thom Daugherty (former guitarist for The Band Perry and The Elms) is gritty-but-sweet and Daugherty’s touch makes for a sound both familiar and original.  The album contains seven originals songs that resonates with fans of Tom Petty and Will Hoge.   Recorded at the Thom Daugherty Studio and Crib in Carmel, Indiana. 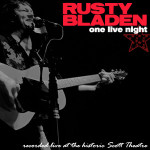 One Live Night (2011) became legendary to Rusty’s fans via YouTube. The complete audio from that concert was mixed and then released as a digital album available on iTunes. Rusty Bladen brings his full band for 18 songs, including “Uppacrick”, “Smoke Like a Train”, “Ride That River”, and “Are You Happy Now?” No covers – just original homegrown rock and roll. The band features Mark Hamilton (guitar), Vernay Reindoller (bass), Kevin Burkett (drums), and JW Smith (keyboards), all rock and roll vets ripping and gliding through the songs. It is what Rusty Bladen does best: live homegrown American rock and roll. The album was recorded at the Scott Theater in Scottsburg, Indiana. 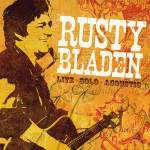 Homegrown Treasures (2010) features 11 original songs. The songs reflect and embellish on what it is like to live someplace for a long time and develop deep connections. Not just “Molly’s Song”, which is a 12-string masterwork of capturing a heartbreaking situation, but also the summertime romp that is “Cumberland Lake”, the tongue-in-cheek “Grass Mowing Song” and the rattled-off list of great folk, country and rock artists in “Diggin’ Folk Music”. Rusty recorded the album – as he did his Rockin’ Your Houseparty release in 2001) -live in front of an audience at Toby Myers’ studio located deep in the country in Brown County, Indiana. 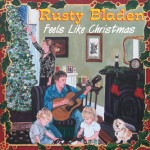 Feels Like Christmas (2006) is simply a great holiday rock and roll album. What if John Mellencamp, Tom Petty, Jimmy Buffett, and John Lennon were all jamming at the same Christmas party? It would sound a lot like this album. Let’s call it countryfried homegrown rock and roll. Songs include the title cut (an original from Rusty) and 12 classic covers of classic Christmas songs like “Go Tell It On The Mountain”, “Away in a Manger”, the Buck Owen classic “Santa Looked A Lot Like Daddy” and rocking versions of “Frosty The Snowman” and “Rudolph The Red Nosed Reindeer”. Rusty has called it one of his favorite albums that he’s made.  Produced by Mellencamp drummer Dane Clark. 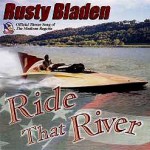 Ride That River (2006) features the official theme song of the Madison Regatta. The three-song EP also includes a re-recorded version of “Red White and Blue”, and a cover of “Never Been To Spain”. The album was recorded at Azmyth Studios in Carmel, Indiana, with a band that features Mellencamp drummer Dane Clark and Mellencamp bass player (and Rusty Bladen and the Shakin’ Jakes member) Jon E. Gee on bass.  Tony Burton, another member of Rusty’s touring band, plays guitar, and JW Smith is on keyboard. The record was cut live in the studio, with all members playing at the same time, a rarity in the modern world of recording.

Rockin’ Your Houseparty (2001) For years, Rusty Bladen had been rocking parties all around the Midwest, and this was the first album that really brough that home. Rockin’ Your Houseparty is the next best thing to seeing Rusty’s live, solo show.  It features live versions of many of Bladen’s favorites, including “Blue Flannel Shirt”, “Ride That River”, and “Smoke Like A Train”, as well as new (at the time) songs such as “Uppacrick”, “Karaoke King”, and more. The set has a bootleg feel, and the audience is upfront near Rusty’s stage during most of the live set.  Recorded live at a party during the 2000 Houseparty Tour at the home studio of Toby Myers (John Mellencamp’s bassist) near Bloomington, IN.

Everything for Everybody (1998) is heartfelt and genuine heartland roots rock. Strong acoustic and electric guitars, a nice Hammond B3 and cracking drums drive the album. Rusty Bladen songs “Blue Flannel Shirt”, “dooyamissme” and “Smoke Like a Train” make their first appearance on record, and are stand outs, the latter for the Johnny Cash influence alone.  Produced by Ed Gaus, who also plays drums on the album, the band for the recording also includes Tony Burton (guitar), Jon E. Gee (bass), Moe Z. (keyboards), and former Why Store drummer Charlie Bushor playing piano on the last track on the record. Recorded at Echo Park Studio in Bloomington, Indiana.

Live Acoustic at the Hoosier Theater  (1995) is Rusty’s second album, recorded live and is currently the only album of his that is out of print. It features Rusty on acoustic guitar, and a band of Dennis O’Neal on drums, Tim Halcomb on bass, and Rick DeBow on sax.  Recorded live at the Hoosier Theater in Vevay, Indiana. A great summation of the early part of Rusty’s solo career.

Are You Happy Now?  (1993) was the first solo release for Rusty Bladen. The record spotlights full band recordings of Rusty’s fan-favorite songs. The CD was in high demand before the days of the digital download, and the River Road Records stockpile of “Are You Happy Now?” completely sold out. Due to demand, it was reissued in both digital and CD formats in 2003 and continues to be one of Rusty’s top sellers today. It features the remastered original recordings with brand-new CD cover art. The set includes the local radio hit “Don’t Blame it on Me”, concert favorites “Real Gone Gal”, “Just For A While” and the title track. Recorded at TRC Studios in Indianapolis, Indiana with the great Alan Johnson producing. The band features Berry Burleson, the former drummer for Rusty’s legendary Madison rock band Aura, on drums for all but one song (Dane Clark plays on “Don’t Blame It On Me”), Rob Johnson on guitar, Tim Ping on bass, and Rick DeBow on sax.