“Rusty Bladen is a familiar one to anyone who has spent any amount of time in the live music establishments of Indianapolis. It’s for good reason that he’s one of the most popular live acts: Audiences love him.” — NUVO

Rusty Bladen songs tell stories about living life in the heartland. That makes them about your life too. — Roots Rock News

The guarantee between Rusty Bladen and his audience is this: if you take the time to come out for a show, you’ll sing, might get up to dance, and come away from it all pretty darn happy. The road and live show have been Rusty’s career, playing throughout Indiana and the Midwest, because there was never really a doubt that Bladen would make music his job – and life. Nine albums and 5,000 shows in his back pocket make him truly one of the road warriors of Indiana’s music fraternity.

Sure, he worked a couple jobs to support himself just after high school – a stint at the Madison State Hospital was one – but it didn’t take long to find his way a stage.  His guitar lessons as a 10-year old laid the groundwork.  Memorizing the Neil Young songbook gave him a start. His frontman chops were honed by five years as the lead singer for a turn-it-up-six-nights-a-week Indiana hard rock/Top 40 band (Aura) in the 80s.

Rusty’s original music, his every-night-a-great time live show, and the pile of encyclopedic rock and roll and country history he can play have made Rusty one of the artists that can be counted on to make a performance also a party. 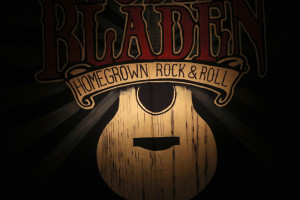 Rusty’s solo show is a high energy, freewheeling tour-de-force of Bladen originals, songs from the radio, and some excellent hippie country-rock tunes. The band show is an exhibition of what five guys holding onto the same roots rock and roll rope can pull an audience into. The band shows are fun, rockin’ and loud. The solo shows are fun, rockin’ and almost as loud. A veteran of the Indiana music scene, Bladen has played many of the clubs, theaters, bars, and festivals in Indiana on his way to building his fanbase. Bladen powers the crowd at his shows with an atmosphere of party songs, sing-alongs and a whole lot of audience participation.

From the album “For The Better”